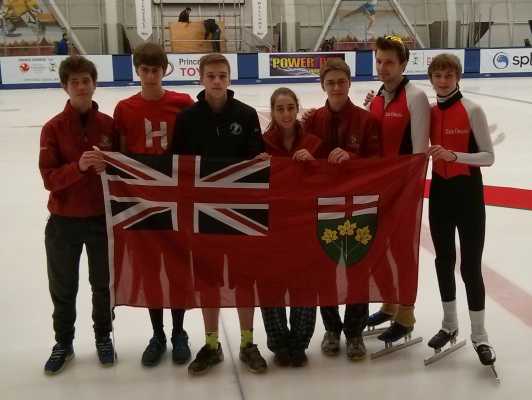 Toronto skaters continued their incredible form at the Canadian Age Class Championships in Prince George, BC this past weekend with more fantastic results!

The racing at the meet was exceptoipnal, and was crowned off in the relays when the Ontario 1 Male team, a team that included four Toronto skaters in the five man team (Aidan, Alex, Gibson, Nils) battled two strong Quebec teams and was positioned to win. With three laps to go the lead Quebec team went down, taking Ontario 1 with them. This led to confusion and a late exchange resulting in a disqualification to both Ontario 1 and Quebec 1! Because of this the bronze medal was awarded to the winner of the B final: Ontario 2. Ontario 2 also included two Toronto skaters within it’s four skater lineup – Mike S and Hayden M!

Our skaters brought home many medals; in fact all but three of the individual Ontario medals, and our skaters were key skaters at part of the two relay medals won by the Province! Final medal winners included:

Amazing results! These represent nine of the twelve medals earned by Ontario!

Lastly, there were tons of comments about the form of the skaters from Toronto, how competitive they looked, how good their form was and even comments on their strategic thinking. Congratulations on making your club, and your Province very proud!