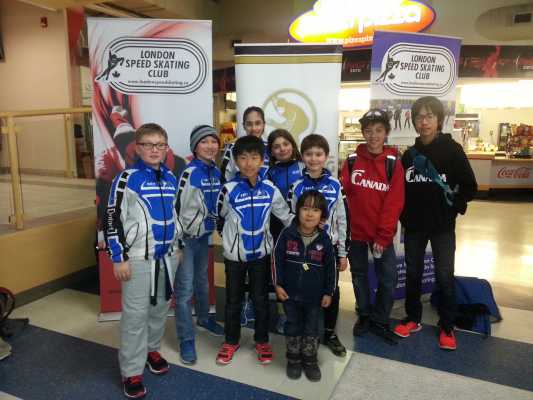 Toronto skaters took part in three seperate meets this past weekend, and achieved significant success in each!

At the Regional level 6 skaters competed in the Provincial C Championships, for skaters 6-10 years old, and hosted by the London club.

Andria S won gold in the Girls 10 division and received a OSSA certificate for Overall Central Regional Points Champion. Matthew I claimed the bronze in boys 10 and also received a OSSA certificate for 2nd runner up in the central regional series points classification. Reno T finished 7th and Hayato K 10th in Boys 10 division. Paul Z finished 9th in the Boys 9 division and Vanessa I finished 7th in the Girls 9 division. All our skaters pushed their limits, skating faster and setting pbs! We are so proud of them all!

Another 4 skaters travelled to Fredericton, New Brunswick to compete for Ontario at the Canada East Championships, a meet targeting the best 11 – 15 years olds in eastern Canada.

Emma V (Girls 14) Ethan O (Boys 14) and Eren R (Boys 15) raced really well thoughout the weekend and learned a ton towards the future. Each will be better racers because of this meet. Congratulations to all.

Finally, the club had 11 skaters at the Canadian Junior Open, a meet for the top 14 – 19 year olds in the country, and also a meet that was hosted by our club at the MasterCard Centre in Etobicoke.

Gibson H was one of the stars of the show, coming 4th overall including a silver medal in the 1000m. Other great performances from Toronto men included Hayden M (14th overall), Adrian R (40th overall) and Elias Z (56th overall). Unfortunately Nils E, one of the top Toronto skaters, suffered an injury and did not complete the meet.

Toronto ladies were also very competitive at the meet. Ayanna B finished 9th, Juliette B 14th, Aileen S 16th and Hannah K 20th. Both Gabrielle L and Megan A came into the meet nursing injuries and skated as well as they could, but were unable to complete the meet.

All in all a very successful event for the skaters and the club. Congratulations.